How to Get Vitamin D Without the Sun 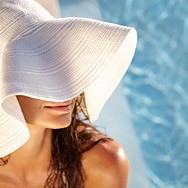 Vitamin D is essential for our health, and exposing your skin to the sun is one way to get it. UVB radiation from sunlight triggers skin to make vitamin D, but there’s a catch: Unprotected sun exposure damages skin. And then there’s this: For most people, sun exposure isn’t an effective way to get vitamin D!

Exposing skin to the sun without sunscreen causes a host of problems, including sunburn and signs of ageing. There’s also the issue that the intensity of the sun’s UVB rays varies with the season, time of day, and geographic location, so the standard recommended exposure times aren’t really helpful. Surprisingly, parts of the northern hemisphere don’t receive strong enough UVB light to spur vitamin D production for a big portion of the year!

There’s also the issue of how much skin must be exposed to the sun for your body to make sufficient vitamin D. Is it enough if you only expose your face and hands, or should you expose your face, arms, and chest? No one knows for sure, and just guessing or not applying sunscreen to certain exposed areas while protecting others doesn’t make sense.

The solution is twofold: Ask your doctor for a blood test to find out if you’re vitamin D deficient. If you are, your doctor can advise you about which vitamin D supplement to take and about consuming more vitamin D–enriched foods. The supplement discussion is important; be sure your doctor talks to you about the dose and frequency of use to ensure you don’t get too much vitamin D, which can cause its own set of problems.

But first, what exactly is vitamin D?

What is Vitamin D?

There are two primary forms of vitamin D: D2 (ergocalciferol) and D3 (cholecalciferol). The D3 form is considered by many nutrition experts as superior. That’s because it more closely resembles the vitamin D your body naturally produces when skin is exposed to sunlight.

Along with supplements, you can get vitamin D from fortified foods, such as milk and orange juice, as well as from eating fish such as salmon, tuna, sardines, and mackerel. Beef, shitake mushrooms, egg yolks, and fortified cereals are also good sources.

Lack of the right timing and/or exposure to the sun that is just not strong enough are big factors in vitamin D deficiency, but some researchers feel that the use of sunscreen is also partly to blame. Although daily sunscreen application does keep skin from making vitamin D in the presence of sunlight, sunscreen use alone doesn’t explain why so many people are vitamin D deficient.

We know that most people don’t apply as much sunscreen as they should; in fact, many don’t apply it at all, or only when they’re at the beach. Even in countries where almost no one wears sunscreen and where the sun’s intensity is strong year-round, there are people who have deficient levels of vitamin D, making sunscreen barely a blip on the blame radar.

Age is a factor, as our skin has a harder time making vitamin D as the years go by. And, of course, not eating enough vitamin D–enriched foods plays a role. Eating a highly processed, dairy-free diet would be one potential culprit, or following a vegan diet and not taking a vitamin D supplement.

Above all, it doesn’t make sense to expose your skin to sunlight in an effort to get more vitamin D. Why do that when you can increase your levels in ways that not only are easy (and often tasty), but also don’t damage the health and appearance of your skin?