Why Tanning Beds are Bad for Your Skin 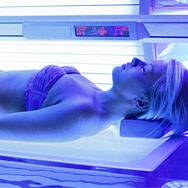 The research is clear: Tanning beds are bad for skin. Many physicians describe tanning beds as “skin cancer beds;” in fact, indoor tanning has been labeled “carcinogenic” by a division of the World Health Organization!

If you’re wondering whether tanning beds are worse than the sun, the answer is yes—but, it’s essential you avoid both if you want to have smooth, healthy, firm, and youthful-looking skin for as long as possible.

Unlike being outdoors in the sun, a tanning bed emits concentrated radiation within inches of your skin. What’s worse, tanning bed bulbs emit mostly UVA rays. Those are the sun’s tanning rays, but they also reach deeper into skin, causing greater damage.

Tanning indoors might not seem as bad as being out in the sun, but just like sun exposure, the damage from tanning indoors is cumulative—that is, you won’t see the worst effects until years later. Whether you frequent a stand-up tanning booth or a tanning bed, the cumulative damage from indoor tanning can lead to:

There’s also the risk of skin cancer—UV radiation from indoor tanning is associated with a 75% increase in melanoma—the deadliest form of skin cancer. UVA rays actually cause mutations in skin that lead to multiple problems in how skin looks and behaves.

And, get this: UVA radiation reverberates within the skin, going from the top down and then reflecting back, giving every layer of your skin a double-whammy of damage that steadily ruins its natural resilience.

Despite all the dire issues described above, we know the allure of tanning beds remains strong. Misinformation about their usage and their safety runs rampant online and, of course, in the many tanning salons around the world. The truth is: There’s no such thing as a safe tan, whether indoors or from the sun.

As scientific research has shown, none of the following myths are true.

Truth: Most of the radiation emitted by tanning bulbs is UVA radiation, but it isn’t capable of triggering vitamin D production in skin. Vitamin D production is stimulated by sunlight when skin is exposed to a sufficient amount of UVB rays, not UVA rays. Tanning beds emit some UVB light, but not enough to spur the production of vitamin D.

Truth: Both sunburn and tanning are causative factors. Study after study shows that people who use tanning beds are at greater risk for skin cancer, whether they burn or, as is more often the case, tan.

Truth: Although the bright lights and close warmth of tanning beds can lift people’s spirits, almost every medical expert in the world agrees that there are better, safer, and less expensive ways to boost your mood than indoor tanning. Examples include daily exercise, meditation, yoga, and eating a healthy diet rich in plant foods and omega-3 fatty acids.

Myth: Tanning beds are safe if you apply sunscreen or special tanning oils

Truth: Although applying a sunscreen before using a tanning bed helps reduce the damage, it doesn't stop it—any amount of tanning is evidence that your skin has been damaged. Tanning oils help spare the skin from the drying, dehydrating effects of indoor tanning, but they don’t offer any protection from the tanning bulb radiation.

Get Tan Without a Tanning Bed

The only safe tan is the one you can get from a self-tanner. Today’s formulas are better than ever, producing natural-looking, streak-free colour that truly resembles a real suntan, minus the damage mentioned above!

If you’re new to self-tanning, check out our tried-and-tested tips in this article, and within no time you’ll be sporting a faux glow without a drop of sunshine or one second of time in tanning salon.